by Anabella and Sofia

Have you ever wondered what it’s like to be a twin?  Most people can only imagine – but we can tell you firsthand!  Our names are Anabella and Sofia, and we are fifteen-(and a half)-year-old twins.

Some twins are complete opposites. Some aren’t even friends with each other.  But not only are we best friends, we also have very similar interests and hobbies (as you’ll see in our vlog!).

Being twins impacts us every day. From random people stopping to talk to us, to basically having a sleepover every night, to saying the same thing at the same time, life as twins is always an adventure!

To get to know what it’s like for us to be twins, here’s a Q&A with typical questions we’re asked, along with questions most people wouldn’t think of:

A:  Anabella is older by seventeen minutes – but next time you meet a pair of twins, try asking, “Who’s younger?”  Everyone always wants to know who’s older, so it’s a nice change when someone asks the opposite.

Q:  Are you identical or fraternal?

A:  We are identical twins – which we found out recently!  For our entire lives, we thought we were fraternal.  When we were born, the doctors told our parents they were 99.9% sure that we weren’t identical.  So, we always assumed we weren’t, because in our minds, we don’t look that similar. 😉  Every time someone would ask, “Are you identical?”, we would answer, “No, we’re fraternal.”  But many people remained convinced that we were identical.  Last summer, we decided to try a DNA test to find out once and for all.  And guess what?  The results told us that we actually are identical!  Now when people ask us, “Are you identical?”, we answer “Yes!” and share a secret smile. 🙂

Q:  How do people tell you apart?

A:  Most people tell us apart by the color of our glasses.  Currently, Anabella has brown tortoiseshell glasses, and Sofia has red glasses.  Also, much to Anabella’s dismay, Sofia has always been slightly taller.  But if you get to know us, you’ll begin to notice our different personalities.

A (Sofia): Most of the time, I LOVE being a twin!  For me, it is having a best friend who understands me better than anyone else, and who thinks so similarly that we’ll say the same thing at the same time.  As my dad says, “It’s like having a best friend that never goes home.”  It’s awesome to have someone a lot like me because we can do all of our favorite things together.  Since we have similar talents, we can collaborate to make something better than we could have on our own.  I can’t imagine not being a twin, and I’m so grateful that Heavenly Father sent us to Earth together!

A (Anabella): I really, really, really love being a twin!  Sofia is the best friend I could ever imagine.  She is able to understand me in a way that no one else can.  I find it so interesting how our brains work so similarly!  Sometimes our mom jokes, “Get out of each other’s heads!”  We both have similar interests, and I love collaborating with her – it’s so cool to have a friend who loves pretty much everything you do!  I’m very grateful to have had a built-in best friend from day one.  I don’t know what I’d do without her!

Q:  What do you dislike about being twins?

A (Sofia): One thing I don’t completely like about being twins is how we’re often good at the same things to the same level, and it can be frustrating if one of us is a tiny bit better!  But this pushes me to try harder and improve, and we learn to celebrate each other’s successes.  Another thing is how we’re together so often, which probably makes it difficult for people to get to know each of us.  Although we’re similar in so many ways, there are things that make us different and who we are as individuals.

A (Anabella): My least favorite thing about being a twin (besides the slight height difference) is when Sofia and I are viewed almost like one person – “The Twins”.  Although we are similar, we are different people.  If you know twins, try getting to know them not only as a pair, but individually – it will be greatly appreciated.

What are you curious about relating to twins?  Any questions for us?  Or, can any other twins out there relate? 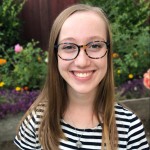 Hi! I'm Sofia, and I'm 18 years old. Some of my favorite things are photography, playing flute and piano, watching movies, reading, and going to Disneyland. I love to spend time with my friends and family! My best friend is my twin sister, Anabella. Our first children's book, Ladybug's Garden, was released last year! See our adventures on Instagram @anabellaandsofia.

Hi! I'm Sofia, and I'm 18 years old. Some of my favorite things are photography, playing flute and piano, watching movies, reading, and going to Disneyland. I love to spend time with my friends and family! My best friend is my twin sister, Anabella. Our first children's book, Ladybug's Garden, was released last year! See our adventures on Instagram @anabellaandsofia.