Book Review: All the Truth That’s in Me by Julie Berry

Four years ago, Judith and her best friend disappeared from their village in the newly-settled American colonies. The friend’s body was found shortly thereafter, and two years later Judith returned home, whole except for the loss of her tongue. Since then she’s people have been suspicious of her, and treat her like she’s stupid because she can’t talk. She spends her time enduring her mother’s wrath and pining for Lucas, who certainly can’t love her back now that she’s damaged.  But when pirates come to attack the town, her actions save the town, and reopen the questions everyone thought were closed for all these years.

Julie Berry is a friend of a friend, and I’ve had her book on my to-read list since I heard it was being published last year. I’m grateful to the Whitney Awards for finally making me get my butt in gear to read it, because the book is fantastic. The writing is spare and poetic (in fact, it might be too poetic for a barely literate girl, which I attribute to the fact that it could be told in retrospect), and the story is rich and engrossing. I loved watching Judith find her voice (literally and figuratively) over the course of the novel. My only frustration with the story is that I was unable to place is historically, and as a reader, I wanted to know where and when it took place. I’m sure this was intentional on Berry’s part for some reason, but this reader would have felt enriched by a clear historical context. 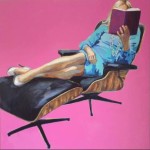 The Prophet of Your Youth